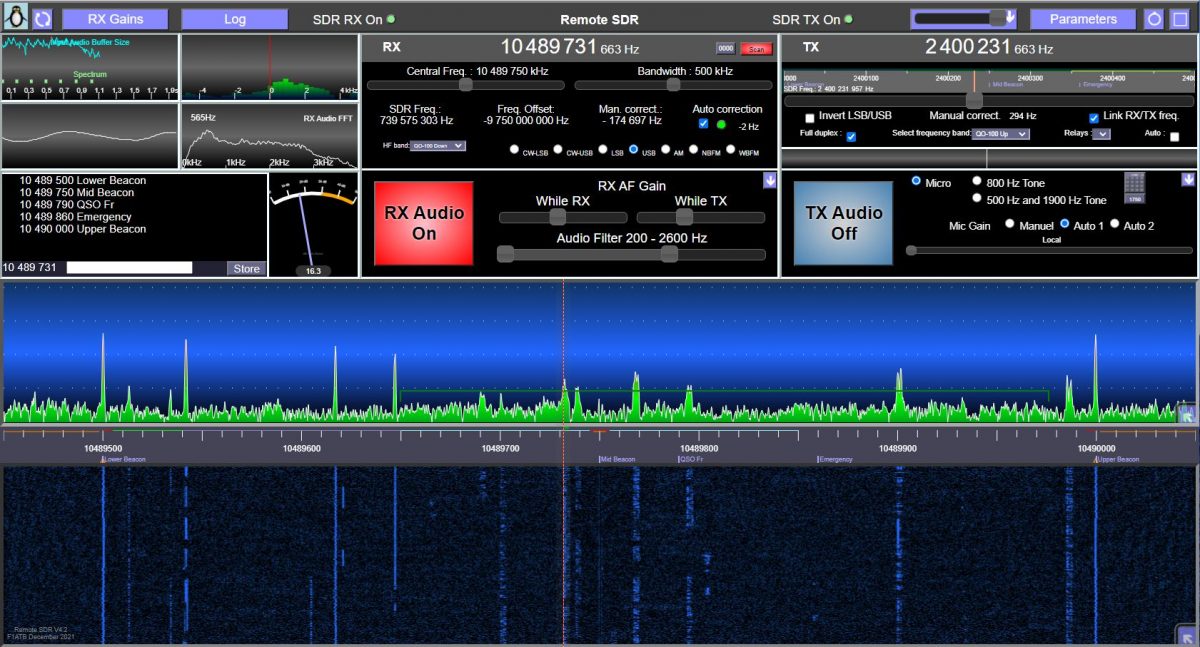 “Remote SDR” or “SDR Distant” is a web application allowing to remotely control an amateur radio transceiver between 1 MHz and 6 GHZ. Its first application was the duplex control of a station allowing links to the geostationary satellite QO-100 / Es’Hail 2.

Remote SDR version 4.4 is available on Github.
New features as :

In degraded mode, it is possible to extend reception in the 0.5 MHz – 30 MHz band with an RTL-SDR V3.

In degraded mode, it is possible to extend reception in the 0.5 MHz – 30 MHz band with an RTL-SDR V3.

Details on the one band transceiver here.

These configurations make it possible to locate the HF part near the antennas, which is essential for links above GHz. In the transmission chain, amplifiers must be added to bring the HF signal to the desired level as well as filtering to ensure that unwanted lines are not emitted. The SDR of the reception chain can be either an HackRF One, an RTL-SDR or a Pluto depending on the frequency band you want to cover. Not all RTL-SDR models cover the same band. The transmission reception is carried out in full-duplex which is essential during satellite connection to hear the return of its own signal.

As of today (October 2021), the Raspberry Pi 4B (2 GB) is a good solution, but there are supply difficulties. The “Orange Pi” are processors similar to the Raspberry Pi running under the Armbian or Debian Operating System. In 2020 I used the Orange Pi One Plus, now in 2021 the Orange Pi Zero 2 also offers a 64-bit / 4-core processor, but also an ethernet or wifi connection. They serve as a web server and perform radio signal processing.

New configuration with the Orange Pi Zero 2 which allows communication via WIFI. No more wired Ethernet link, only 220v near the transmitter / receiver.

Note that you need a USB Hub between the Pluto and the Orange PI One Plus (not for the Orange Pi Zero 2). This corresponds to a system bug.

The source code and the image for Orange Pi and Raspberry Pi 4B are available on Github https://github.com/F1ATB/Remote-SDR .

There is therefore a reduction of approximately 100 in the communication speed required, which facilitates remote control via internet / ethernet without loss of quality through data compression.

Indeed, we have a remote computer which has a GPIO to which it is possible to add functions. For example, controlling an antenna rotor, measuring electrical voltages, temperatures, etc., … It is possible to access the system via the web (Apache server), in SSH to launch an application in terminal mode, or in graphical mode by the desktop and VNC.